At Last – The French Beans

Well two of them any way – finally went in between the runners and the lettuces in front of the greenhouse. The weather was goodish today, plenty of sun but still a cool northerly wind – not very pleasant when sitting still outside, as I was when fishing part of the day. There are a couple more french beans to go in probably tomorrow, and I planted another four beans today so that there are some beans later – they have a relatively short cropping season I find.

There were a few other jobs to do both today and yesterday. Some more 'salad leaves' (which includes things like 'pak choi'), and a row of parsnips (a bit late I know but they should grow enough by winter hopefully. All planted near the greenhouse in short rows near the others already planted. I've thinned out the rocket and mixed leaves already coming up as well. The carrots have made a fair showing now – so another row should go in soon.

The lettuces around the brassicas have been watered with liquid fertiliser a couple of times as well, and some of the brassicas as well. 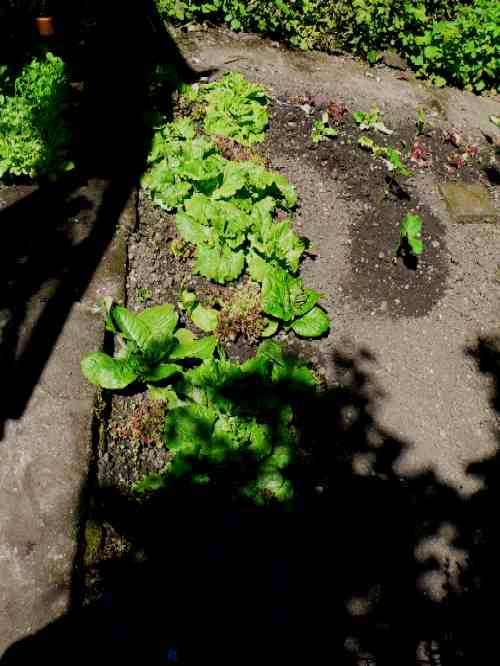 As tonight was fairly still the ground-elder received another dose of systemic weedkiller – it is a difficult weed to eradicate and although starting to look a bit sad, another dose will help it go – at least for now.

Also, I finally put in some Dahlias yesterday (they've been around for over a month) after clearing part of the border around the lawn – lots more border to go though.

I'll update the story with pictures as soon as I manage to take a few.