The weather could be better – we’ve had rain, some sun and just now cloudy (all day) so very mixed so far.

How’s the garden going though I hear you ask – well ok just about. I’ve hardly had any time to spare over the last couple of weeks so not much has been done in the garden.

The broad beans are flowering like mad now so beans soon I hope. (see below)

I planted four runner beans, a few days ago (they are just behind the broad beans). One of them has succumbed to something, but the other three look ok.

There are now about 8 french beans out – some of them looked a bit unwell after a very cold night about 10 days ago but they have recovered now.

The cherry tomatos outside are doing well, again they were hit by the cold night but seem to have recovered. There are a couple more and one ‘olive’ type in the greenhouse and they are doing well (below):

Tomatoes in greenhouse – ‘olive’ type is the small one…

I’ve also managed to plant another three olive types in a growbag near the kitchen.

The lettuce are coming along, more than 20 planted out and after putting the anti-bird CD system up the pigeons seem to have kept more or less away.

The potatoes are really quite big now, I just hope they produce something….. 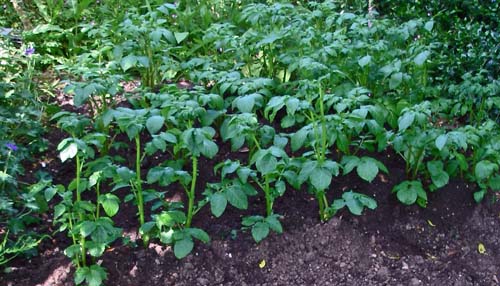 Meanwhile, the row of radishes are almost ready to start harvesting, the carrots are growing but the rocket doesn’t seem to be doing as well as I would expect. I’ve planted other rows of rocket and ‘mixed leaves’ and they are just coming up now.

But- lots of seeds have failed to germinate so although I’ve managed to get some chilli peepers into a grow bag, and four others as tiny seedlings, none of the sweet peppers have come through. Neither have the courgettes and only three climbing peas… so I have a large bare (apart from weeds springing up) patch of ground still.