Well we have rain, mist in the morning and still some sun though noticeably not as hot so autumn is with us for sure. Of course harvesting is still going on apace, still gathering tomatoes, french beans and brambles (1.4lbs a couple of days ago) and a few mangetout peas from the last row now. There are cucumbers, courgettes (just a couple of small ones) and peppers still to harvest also. I did finally harvest one of the four potato containers, variety ‘Bonnie’ – meant to be an early, but just not possible to harvest until the other day – I collected over 9lbs of potatoes, not sure if that is a good harvest (only 4 seed potatoes) but seems ok. I have cut the haulm back  on the other containers and will leave them for a couple of weeks (recommended in one of my books). 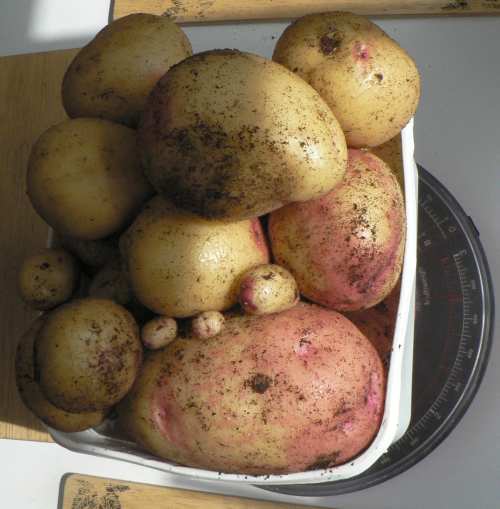 On the whole though it has been a very bad year in my view, one part of the garden has remained uncultivated and one other of the sections has really only supported a courgette and cucumber plant plus some late lettuce (just ready now). The only ‘success’ might be the climbing french beans which have lived up to their potential from previous years and I will now use them as the main bean crop.

I look round at the garden now and it is just a mass of weeds and could hardly be described as showing signs of a good gardener at work – so really I can’t say I have become any better at looking after the garden all.

One plus point, another squirrel has been captured, that may be the last of the current local batch but more will arrive eventually.