Well today the temperature did manage to climb above 15degC, but last Thursday the car had frost on the windscreen (it was 5:30am but nevertheless!) and we’ve had more showers. It would be good growing weather but for the fact that the temperature has hardly managed to climb over 10degC many days.

So the outside tomatoes and courgette/squash have survived, but have more or less stopped growing – the courgette has been also under attack from slugs which hasn’t helped. 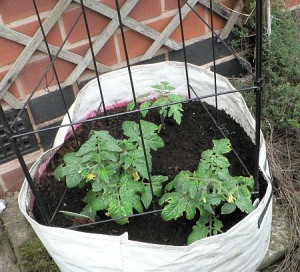 Tomatoes near kitchen – hardly grown i the last week

In the greenhouse, I’ve given up with the peas I planted a while back and planted some more mangetout from a new packet. The climbing french beans just produced two healthy seedlings (from 8 beans) plus one sickly one which isn’t going to survive. So a new pack of beans was bought and another 8 planted – I don’t need 8 but I’m just being pessimistic. 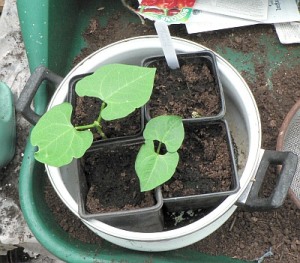 One of the courgettes from the greenhouse was big enough to be planted, so that has gone into the raised bed with the other. One of the cucumbers is almost big enough to join them so that will go, weather permitting, in the next few days.

Just to complete the greenhouse picture, I’ve planted some basil (from fresh seed – a previous sowing produced nothing), and the bought plants (2 tomatoes and a pepper) are well away now, the tomatoes over a metre high and in flower. I’ve planted 4 of my tomato seedlings in other growbags plus 2 more bought pepper plant (jalapeno) since none of my seed planting produced anything.

Six of the remaining tomato seedlings are now in 2 growbags outside the greenhouse, but still protected by the door ‘cold frame’ (just planted out today).

The grapevine in the greenhouse is now growing apace and the flower clusters are visible now, with the branches already over a metre long – so the hard winter hasn’t affected that seemingly.

Outside, the salad leaves in a container outside the kitchen are now being harvested and contributing to salad meals – I must plant some more soon to make sure we have continuity. In the raised beds some rocket, lettuce and a few leaf beet seedlings have appeared but the germination rate doesn’t seem to have been terrific. One row of rocket in a container however has come up almost complete (different packet  – if only I could remember which….).

The garlic has mostly come up and the onions are just beginning to show. Meanwhile the broad beans (which have some onions and garlic round the edge of the raised bed) are in flower – at least the first row plus that was planted, and I need to do something about supporting them soon. 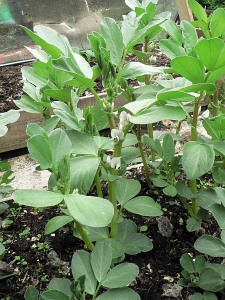 All the potatoes are up, the ones in containers have had to have more compost added several times now and it won’t be long before they are at the top of the container. Even the ‘rooster’ variety which were slow starting are catching up fast. The maya variety planted in the ground are now through and will need earthing up soon.

The weather hasn’t stopped the weeds growing of course, and I’ve been trying to fight them back over the last few days – but I haven’t had the time to really get to grips with the weeding so the garden is pretty untidy. What’s more the hedges are now growing like mad and it won’t be long before hedge cutting becomes a priority.

I just get the feeling that spring hasn’t really happened or has been compressed somehow and suddenly everything is growing fats to try and catch up – trouble is I haven’t got the time to keep up with the rate of growing now!

We have two lilac trees in the garden and they are both in flower now so there is some colour and perfume in the garden. The are some kerria bushes also giving a splash of yellow as well.

No more butterflies recently (no surprise with the weather) and bird activity is more or less as before. On the vermin front, another mouse in the greenhouse, and three squirrels evicted in the last week!

A wildlife photo for a change: 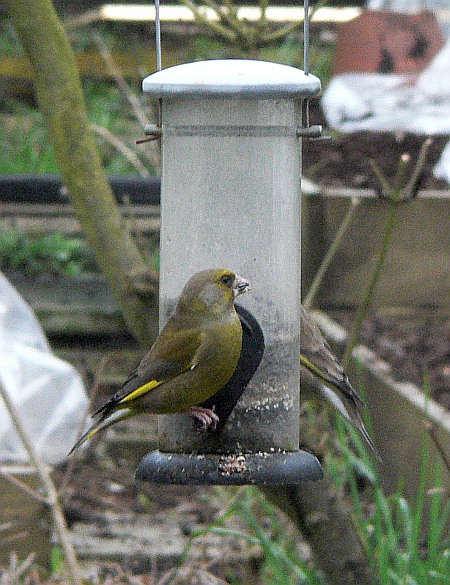