Finally I had the ton of topsoil delivered that I’d ordered back in February when there was a money off offer available and it arrived on Thursday last week. So I was faced with putting it into raised beds, the reason for ordering it in the first place. I only had one ready though, in place just in front of the greenhouse so a couple of days of rapid construction ensued – I did have all the bits available (‘gravel boards’ & treated post) and each only took a couple of hours to make – a bit longer to put in place though. The area they have been placed in (plot C) had been left alone rather, apart from having a load of turves from the lawn placed over it (upside down of course) – so by now a decent crop of weeds were established – I took the easy way out and zapped the area with weedkiller, left it for a day and then cleared away as much of the vegetation as I could easily. Once the frames were in place, I filled them up. It didn’t all happen at once of course, but over several days – first filling the existing bed, then constructing one, clearing the site, placing an filling, then repeat. Between the three they took most of the soil, and many barrow loads from the front to the back garden! Now I’m just going to leave them to settle for a while, then add some compost as the soil is rather sandy and I think needs some organic material adding. 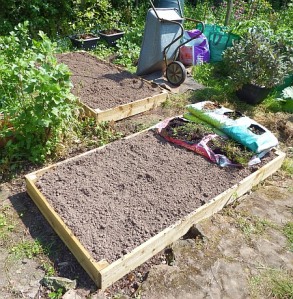 Two of the new raised beds (in plot C)

The growbags on the end of the bed are old ones from last year, their contents (minus the weeds) will go into the raised beds once the soil has settled a bit. Next job is to put slabs down round the beds. 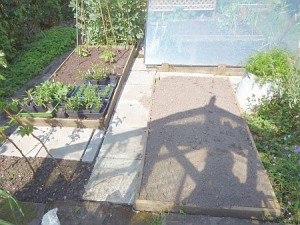 Above is the raised bed I built earlier in the year – now filled (in fact over-filled, but I’m hoping it settles a lot. To the left is one of the first set of raised beds with trays of perennials still to be planted out on top – beyond the trays are the climbing french beans.

Since the pictures I’ve planted out some dwarf beans in the area where the trays were in the photo above (it doesn’t mean I’ve planted all the perennials out though!). I’ve now got a couple of climbing French bean plantlets to add to the existing three as well – probably in the next day or two.

The salad crops and tomatoes outside the kitchen are coming along nicely: 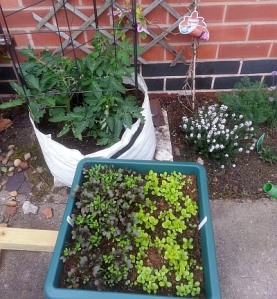 The ‘climbing’ strawberries are now in a container near the kitchen provided with some framework to climb up – they came with some fruit already developing on them and one or two are already turning red. 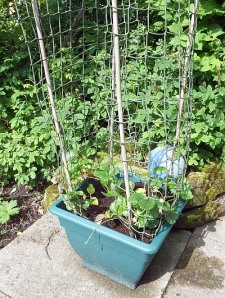 The rain over the last few days has been good for the garden after almost a week of fine weather – I’d already had to get the hosepipe out once and would have done so again if not for the forecast the other day.

The mayhem in the greenhouse is settling down now – most of the trays of plants are out, but the tomatoes are beginning to occupy a fair amount of space of course. Still need to plant more peas but not much else to plant now. I still need to deal with the aubergines that germinated so late, and I now have a different cucumber from mine (marketmore) courtesy of my next-door-neighbour as we did a swap, just need to get hold of a courgette now…. I have given away the two large left-over tomatoes but still have three small ones left.

Not a great deal to report, still fighting the pigeons off the bird food and took a squirrel on holiday the other day. Saw around 6 house sparrows today after seeing none for a long time. I think it must be parents and this years chicks – I hope some of them survive and hang around as they have been mostly missing. Otherwise bird-wise the tits have been busy on the feeders, I suspect as they have chicks, there’s been a few starling mobs (again, parents and chicks I think) over the last week, and green finches appear but no gold finches this year so far – strange.

Just to show it isn’t all vegetables here’s a flower picture – one of the violas/pansies I spent so much time potting on – now in the garden: 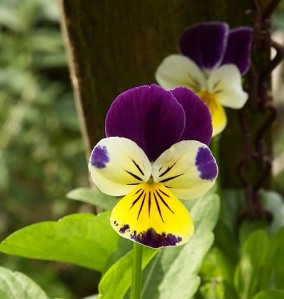