We’ve actually had a decent bowl full of broad beans and mangetout peas eaten as salad (after cooking) the other day to share with other family members as part of a salad meal. On top of that my wife harvested a fair number of redcurrants – the first year we’ve managed to get to them before the birds…. 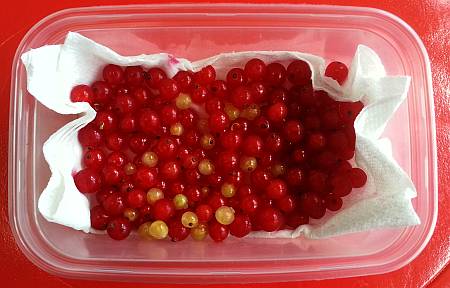 Redcurrants (and a few whitecurrants) – even after having a load with breakfast!

All from one bush as well, although there are much fewer on a second bush, there are still more on the one they came from.

We have still been harvesting ‘cut and come again’ lettuce from the container outside the kitchen, but it has just about reached the end, plus the rocket in the bed by the kitchen has started to flower. Unfortunately the replacement salad plants, in a long container, aren’t quite ready yet so we’ve had to buy some lettuce, bad timing for the sowing, my fault.

The climbing French beans have just started to produce and most of the plants are in flower now, so harvesting soon I think.

I’ve now got two of the three courgette plants outside, one in the ‘protected’ bed and the other in a largish pot sunk into the raised bed outside the greenhouse (there is a cucumber at the other end, likewise in a pot). Also I’ve plated a number of mint varieties near the old pear tree – there was some mint before but it was rather mixed with a load of weed so I cleared most of it out. Now there is ‘red’, ‘swiss’ and ‘moroccan’ mint as well as plain garden mint in there alongside some ‘spearmint’ that was there already: 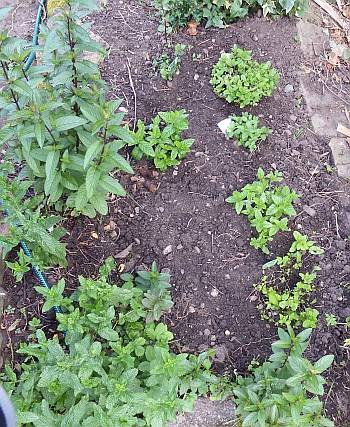 Elsewhere, everything is just growing fairly well as we’ve had pretty sunny weather over the last week or so – so much that I’ve had to get the hosepipe out to water a couple of evenings.

To bring you up to date with the caterpillars – here’s what they look like now:

I’m pretty sure they are ‘peacock’ butterfly caterpillars – and I’ve counted seven separate batches of eggs that have hatched in the nettle patch – so there are literally hundreds of them squirming about currently – once they are a bit bigger they will spread out so I won’t see them much I guess. Anyway it’s good to know I’m doing my bit for the butterfly population.

‘My’ friendly robin eating some ‘fat ball’ (the white bit at the back) which saves it from following me round I guess. I’ve only got to be working in the garden for a few minutes and it will appear next to me with a sort of ‘well then uncover some food’ attitude. It basically waits until I stand still (which I do deliberately to give it a chance) then it will hop right up to my feet if necessary checking for food – I guess it’s feeding chicks so it’s fairly desperate.

A picture from our ‘wild’ area – ox-eye daisies, always a delight this time of year: 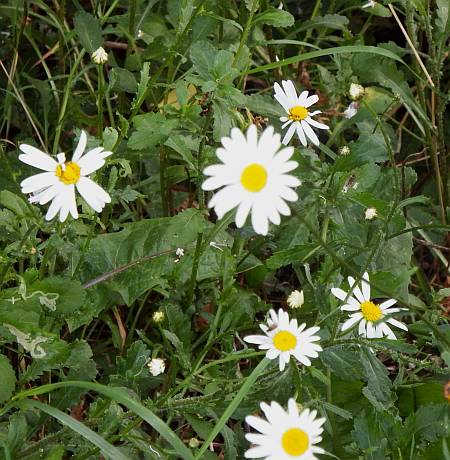