The last couple of weeks I have been mainly harvesting – tomatoes. With the odd courgette and cucumber. One courgette again was a monster before I spotted it. One so big the only thing to do with it was to cut it up and put it into the compost bin! There are still a few carrots as well – just enough for our meals when needed.

The tomatoes have been ripening at more or less the rate we can use them, either in salads or for home made pasta sauce mostly. There loads more to come yet. Three problems have arisen this year. Firstly, the small tomatoes have been in many cases too small – to the extent that today I cut off a truss with tiny tomatoes still ripening and put it straight into the compost bin – they really were too small to be useless. Secondly, many of the small tomatoes have split – not a problem if they are picked quickly enough, but they do start to go mouldy if left very long.

Thirdly, many of the Ailsa Craig tomatoes have been affected by a sort of skin affliction (I’ll add a photo) and have basically been a bit weird – though mostly edible.

Not so good Ailsa Craig 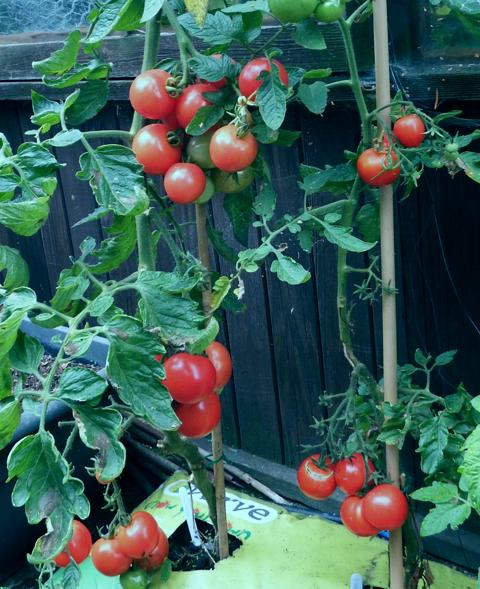 The Pomdoro tomatoes have been producing quite well though 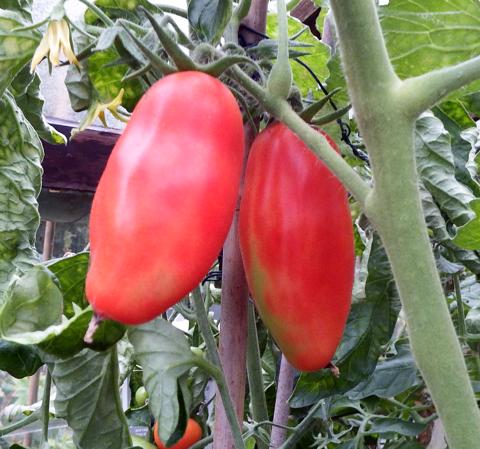 I’ve left the climbing french beans in as the recent sunny and fine weather has encouraged them to produce a few more beans – in fact it’s been so dry over the last couple of weeks I had the hosepipe out last night and watered the flower area mostly – whereupon it promptly rained overnight! Though not a lot….

Raspberries are still being produced in enough numbers to be handy with my breakfast cereal, plus the odd strawberry or two from the climbing strawberries.

The nasturtiums have suddenly had a new lese of life because if the good weather (see below).

I sat in the kitchen a week or so ago and watched a squirrel happily squeeze through the grid on the ‘ground feeder protector’ (see this post – scroll right down) and start nibbling the bird food. Now I should explain that two sides of the protector are adjustable for width of grid – and I’d left them at the widest setting, which only ‘juvenile’ squirrels are supposed to get through. What was worse was that there was not one but two squirrels scampering around the law -hmmm. Anyway, I adjusted the sides to a much smaller grid size and yesterday I saw a squirrel going round and round the protector unable to get in – success. The squirrel didn’t get away with it though – walked into the squirrel trap later on and has now gone on holiday some distance away.

Meanwhile the dunnocks and robin are happily hopping through the grid sides to get at the food. Not seen a blackbird trying to get in yet, but int theory they should be able to get in. Not many pigeons about either but I have seen one go round the protector looking rather puzzled.