Yes at last not only built but in place as of today (Thurs) raised bed No. 10, with one more to go. It all got a bit complicated as I had a big bag of soil sitting over where bed No 10 was to go which I needed help to drag off to one side (onto where No 11 will go) before I could even position the new bed frame. Then it proved difficult to bed it in (there’s a post at each corner which needs to go into the soil about 30 cm to anchor the bed) particularly as the end nearest the hedge was trying to go into dry packed soil. In the end I had to dig out holes for all the posts before I could get the bed down enough (on Wednesday). So eventually I was able to get the bed frame in place, then fill it from the bag of soil – which now has very little left in it so will be easy to move out of the way – mind, there are a number of other things to move as well like lino (taken from the kitchen when the floor was redone) which was there as a weed suppressant. So maybe the last bed will take a few more days before it is in place.

The robin came down to ‘help’  while I was working on the bed and filling it, so periodically I had to stop while the robin had a look round for any titbits (see below). 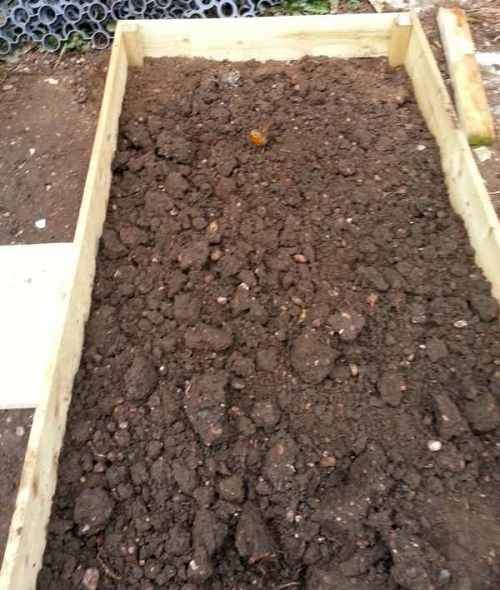 Meanwhile in the greenhouse the tomato seedlings are out of the propagator now and the cucumber seedlings were as well – but they suffered a bit when the temperature rather unexpectedly dropped a couple of nights ago, so now they are back inside and looking a lot happier.

Oh yes and I planted out the ‘de monica’ broad beans in the bed alongside the greenhouse (where there was already a couple of rows of beans planted last autumn).