Well a couple of days where temperature have topped 20DegC, maybe – but we still had high winds and morning temp of less than 14DegC only the other day so I’m not yet convinced – and neither are my plants, particularly the climbing & french beans.

However the big emphasis over the last couple of weeks has been planting out lots of flowers, both perennials and annuals as in just over a week our garden will be open to the public for a coupe of days! So panic… The other major task has been sorting out the paths between the raised beds which of course I’d not bothered with when I put the beds in since there was only me wandering between them – still it’s a good thing to have got them done – almost. 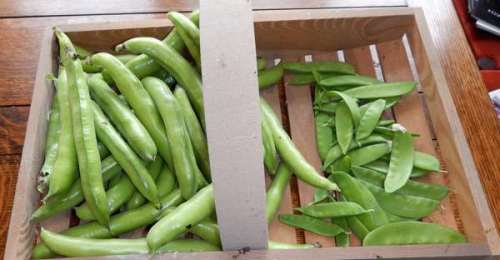 One or two minus point – I planted a half row (along the length of a raised bed) of ‘lollo rosso’ lettuce, which germinated nicely along the whole low, then I sowed the other half with a different mix of lettuce, which also germinated along the whole length – until…. a few days later half the row disappeared! Either slug or pigeons, so I covered it with an old fireguard and scattered a few slug pellets around. The lollo rosso is ok I thought – and then half that lot went! So more slug pellets and a covering – so we’ll see.

I do have one cucumber on one of the plants but the others (2 of them) don’t look like producing anytime soon. I have managed to plant two courgettes at last though.

Some other sowings have been a bit disappointing as well in particular some ‘baby leeks’ which I’ve grown before, to be fair the seed was a bit old but also the cos lettuce (maybe also got by pigeons?), leaf beet, beetroot and spinach only have produce a few seedlings.

The french beans and climbing beans really haven’t groen much at all over the last few weeks thanks to the weather – so if we do get some more sunshine now maybe they will take off – I’ve still got a few more dwarf bean plants to plant out.

The tomatoes are all going well and I’ve ‘stopped’ all of those in growbags in the greenhouse as they gave 3 or 4 trusses now and all have the first truss set at least so I’m feeding them. Those outside the greenhouse i growbags aren’t quite as advanced as you might expect but some have tomatoes on already as have the ones in the raise bed. The plants near the kitchen don’t seem quite as happy, not sure why as they get the best of the sun.

Plenty of frogs after rain last week and a few toads, and as usual they are occupying some of the growbag holes in the greenhouse – so whenever i water it creates a bit of chaos as they all seem to bject.

The robin (or a robin?) has appeared whenever I’ve been working in the garden – so keen that I as was kneeling and clearing some weeds it hopped right in front of me to investigate – so now I’ve learned just to stay still when it appears and it will happily hop around my feet collecting morsels. I suspect it is feeding chicks (again?) as I can hear them calling in the hedges when it flies off.

Dried mealworms are still very popular on the feeders and on the ground station plus sunflower seeds are going at a fair rate from the seed feeder and a ‘fat block’ is being pecked through with enthusiasm. It’s been encouraging that some of the birds are house sparrows feeding chicks so maybe a few will stay around.

The trail camera shows hedgehog and fox still around but no new sighting of the badger. I’ve been working in the area that they pass through so maybe the changes have put the badger off for the time being.

A new squirrel has appeared and seems not to like peanuts so can’t be tempted into the trap for now – keeps climbing the bird feeders and wrecking the feeders trying to get at the seed etc. – I’ll need to keep an eye on that situation.