Managed to spend a bit of time in the garden recently and cleared away the dwarf beans – not impressed with them this year lots of foliage but not too many beans, plus I cleared away the extra pea plants I’d added into the same bed and some bits of the climbing beans.

Also, most of the tomato plants in the greenhouse have begun to die back or have produced as many tomatoes as they can so I’ve chopped many of them down or, in a couple of cases, cut them right down to the growbag. There are still a few tomatoes to ripen in the greenhouse but will soon be finished. Meanwhile, there are plenty of tomatoes to be picked outside the greenhouse – I picked about 3lbs the other evening which were promptly made into pasta sauce for that evenings meal.

Harvesting is of course still ongoing – we’ve had carrots, and some calabrese recently and there have been enough raspberries to make my breakfast cereal interesting. I picked half a pound of brambles the other day, and some more this evening. The last of the blackcurrants today plus some maris piper potatoes ready for our Sunday roast tomorrow.

There are the grapes to harvest from the greenhouse yet, plus several sweet peppers – and three cucumbers turned up the other day – they’d been hidden under courgette leaves! 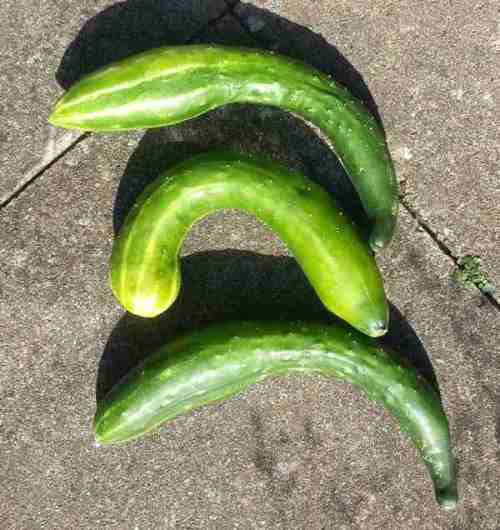 Three surprise cucumbers – not small either

At least the courgette production has slowed so there isn’t so much of a courgette crisis now.

The most strange thing happened the other day as I was harvesting brambles – a small mouse appeared from under the hedge, ran round my feet, then proceeded to nibble happily on some titbit a foot or so away – it was so unworried that I was able to reach down and touch it – and it didn’t even rush off then – I tried to take a picture, but of course while I was preparing, it moved off out of sight!

The bird feeders have been visited frequently just recently by mobs of long-tailed tits plus some green-finches as well as the usual visitors.