Summer is on the Blink!

We seem to be in almost a winter weather pattern with lows coming across the UK one after another. So we may have a day or so of sunny weather then rain. It’s been so bad that I only finally was able to mow the (still wet!) lawn this evening after more than a couple of trying to do it when the grass was dry. I finally cracked this evening when I was rain forecast more or less for the rest of the week.

Since then we’ve had a shower or more almost every day and the grass is growing like mad!

The vegetables are growing well though and I’m harvesting plenty of climbing beans, together with the french/dwarf beans (almost finished now though). Only a few mangetout peas at the moment although I have one new seedling to plant out (only one out of four came up!). I’ve sown a couple more pots full today.

The tomatoes are producing well, especially the small ‘sugar plum’ types but some of the larger ones just ripening now.

Some of the current crop of tomatoes 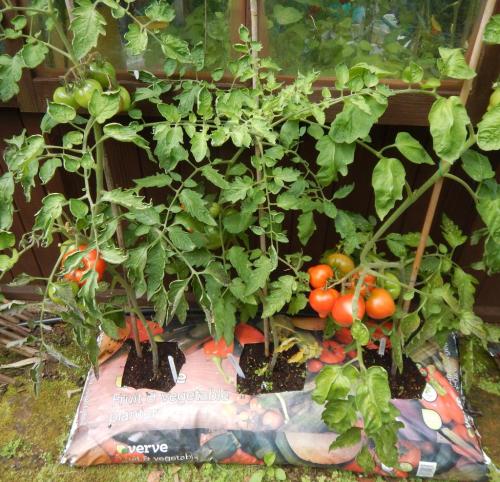 Tomato plants outside the greenhouse – these are ‘Marmande’

We’ve had plenty of cucumbers as well although just at the moment there aren’t any new ones ready but the courgettes are producing and as usual if I’m not careful picking them while they are small we’ll have a glut.

One unfortunate side effect of all the rainy days is that I haven’t yet harvested the garlic even though they are ready, but they really need a chance to dry out once I’ve dug them up.

The broad bean plants are still there just in case the flowers on them just now actually produce some beans… unlikely but you never know.

Over the last couple of weeks I have harvested all of the blackcurrants and gooseberries (some of which were immediately cooked into gooseberry ‘cobbler’). The raspberries are just about over, but the blueberry bushes are full of ripe berries – and the birds haven’t found them yet! There are a few strawberry flowers so there may be a late crop. The brambles are ready now as well – I’ve had a few already with my breakfasts.

Some of the blackcurrants and gooseberries

I’ll close this now and add more in a couple of days….