There is a Plan – Sort Of

I actually had sketched out a rough plan before CHristmas but then lost track of the bit of paper, but found it again the other day and tidied it up a bit – so here it is (still a bit sketchy): 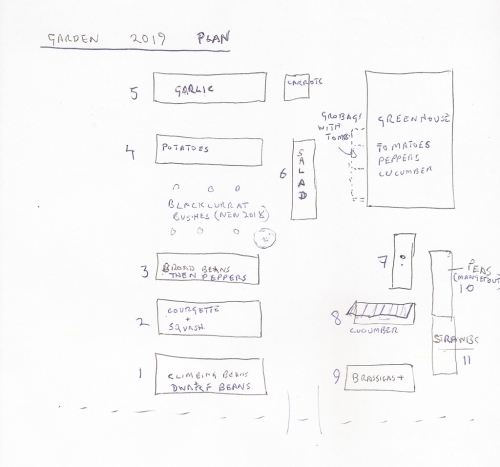 It does mean hopefully I’ll remember what I’m going to put in each bed, although bed 7 is still ‘unallocated’.

The garlic (bed 5) is already filled of course, half with plants left over from last year and half new plants with the bulbs planted a month or so ago and now just sprouting above the soil.

Meanwhile, looks like one or two Cosmos seedlings have appeared in the greenhouse. No sign of the broad beans yet, but I did peek at one and it was definitely starting to sprout.

I did spend a bit of time in the garden yesterday (no chance today, it is raining) and cleared up a couple of the beds and added compost from used ‘grow-bags’ and moved the blueberry bushes to the area round the new blackcurrant bushes (which do have buds now). That freed up the bed in front of the greenhouse (7) where the containers of blueberry bushes had been since last year. I needed to remove a bit of soil from that bed before adding compost from the grow-bag, but that was used to top up the blueberry containers which were a bit short of growing medium.

In the greenhouse I sowed a couple of pots with peas, the purple variey I bought recently (can’t remember the name just now), just as an experiemt really.

So let’s see how the plan works out…..