Seeds Having Been Planted

What you may ask was accomplished? Well, I planted tomatoes in pots and put them into one of my ‘incubators’ in the greenhouse. They were a mixture of Ailsa Craig, Gardeners Delight and some small type that I can’t remember the name of right now. Plus a pot of sweet pepper – a long type rather than the round ones. So we’ll see what comes up – especially as some of the seeds are a year or so older than recommended. I suspect I need to buy some new ‘baby’ tomato seed as well.

Around a dozen or so of the broad beans are coming up now and will need planting out next week I would guess.

So to prepare for that I’ve covered parts of two of the raised beds with plastic cloches to try and warm the ground up a bit since it must be really cold as a result of the cold weather.

On top of that I pruned the buddleia plants, which were really in need of it as they were sprouting like mad, despite the cold weather, and tackled some of the branches on the central pear tree as well as some of the holly branches in one of the sections of hedge. The big holly hedge really needs a serious prune but the weather has just made it impossible to spend the time doing it, just too cold and too windy. 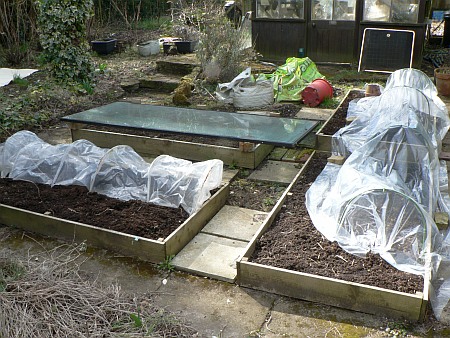 Note the glass cover on the other raised bed – still haven’t worked out the best way of raising and lowering it….. I need to tackle it soon as I want to get some early salad crops in there.

Bonus picture of some of my crocuses enjoying the full sun today. 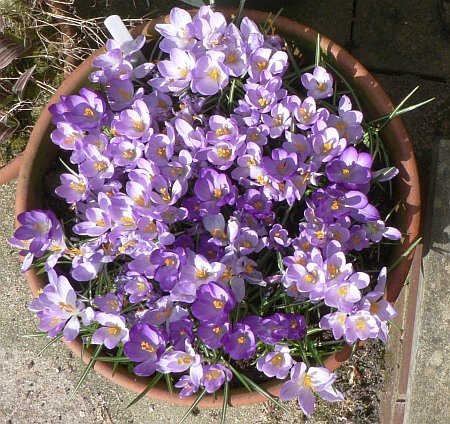 Crocuses loving the sun at last

Meanwhile I notice a female blackbird is collecting nesting material now, so the birds think that spring is here at least. Of course while I was working in the garden the robin turned up and hung about in case I disturbed any worms etc. and one of the male blackbirds is now so casual that he hangs about when I put breadcrumbs out on our patio and hardly bothers to move out of the way while I’m doing it.